When I learned to bake sourdough bread, I only ever used flour that I was familiar with; white bread flour and whole wheat flour. I never really thought of using rye flour until later on, when I discovered that most artisan bakeries used at least a portion of rye flour in many of their sourdough breads. I wondered why, and curiosity led me to do a little research and experimentation…

Why is Rye Flour so popular in sourdough bread? Rye flour is very unique in its make up. It contains:

The process of traditional sourdough fermentation helps bring out the best of the unique properties in rye flour, that breads using baker’s yeast can’t.

Here are 6 reasons why rye is so popular in sourdough bread, along with some useful tips when working with rye.

Rye flour has an especially high level of activity in sourdough bread when compared to other flours. Because rye uniquely attracts many more yeasts than other flours, it becomes particularly active when introduced to sourdough, and ferments much faster. This makes it an easy choice to add to your sourdough to see some activity and rise in a shorter period of time.

Due to a combination of the following:

Rye offers an extremely complex flavor profile, and bodes particularly well to long and slow sourdough fermentation, for that flavor to develop even further. With hints of fruitiness and very subtle sourness, rye is very popular in sourdough bread as it gives wonderful unique flavors that compliment the sour notes of this traditional style of bread. (Click here to read my tips on manipulating the sourness of your breads)

If you’ve ever eaten a 100% rye bread, you’ll have definitely noticed that it is dense, dense, dense! Although it has such beautiful flavor, it’s not the kind of bread you can use for a packed lunch sandwich.

However, when rye flour is used in sourdough, the fermentation process actually reduces its density, making your loaf more aerated and fluffier, than if you were to use use rye in ordinary commercial yeast bread. (For ways to make sourdough bread less dense, check out my 20 tips here).

Why Rye Bread is Less Dense When Fermented with Sourdough

Rye flour, unlike other flours, contains a very high level of an enzyme called amylase, in a unique form. Amylase is the enzyme that breaks starches into sugars.

Because the amylase in rye remains active in the oven, it is is able to prevent the bread from rising. This is where sourdough fermentation comes into play…

The acids produced during sourdough fermentation slows down the reaction of the amylase, producing lighter loaves than if you were to use ordinary bakers yeast.

Sourdough bread tends to have a slightly drier texture than yeasted breads, but rye helps to bring back some of that moistness. This is because rye contains a much higher level of a complex sugar called pentosans. Pentosans absorb huge amounts of water, some of which is retained even after baking. This results in a moister crumb than ordinary white sourdough bread, keeping it softer for longer.

#5. Rye is Best Suited to ‘No Knead’ Recipes – And So is Sourdough!

Rye flour is extremely low in gluten. In fact it is so low in gluten, that it is completely unnecessary to knead a 100% rye bread. Sourdough bread actually also performs well without kneading (unlike yeast breads, which HAVE to be kneaded). And so, rye is the ideal addition to sourdough bread, due to its inability to respond to kneading.

Many sourdough bread eaters enjoy the bread due to its increased nutrition, compared to ordinary breads. Rye contains a lot more nutrition than wheat flour does, and this is especially true for sourdough rye bread. The slow fermentation that occurs when making sourdough bread, increases the nutrient availability of the flour.

Before using rye flour, you should know that there are differences to it that mean simply making a switch from wheat will not do. Here are a couple of things you should know about Rye before baking with it:

Because rye is so low in gluten, kneading the dough is completely useless. Kneading will not help rye to develop structure at all. Giving it a gentle mix until all ingredients are combined is sufficient for the fermentation to begin. And its the fermentation process that will give it the structure, not kneading.

Shaping May be Unnecessary

For much the same reason, shaping a 100% rye bread will also be impossible. At best, you may be able to make a shape the loaf in a way you would a lump of clay, but you won’t be able to shape using your regular bread shaping techniques. Rye breads are many times poured into a loaf tin without shaping at all for its 2nd rise. This way the loaf tin helps hold up the breads shape.

Rye is Highly Extensible, but not very ‘Elastic‘.

This means it can stretch out quite a lot, but not bounce back. This is something to be aware of. Don’t be deceived into thinking you can knead the dough!

Rye Bread will stay Moist even after being Fully Baked

Because of rye’s ability to absorb and keep a lot of it’s moisture, the inside of a 100% rye sourdough loaf will have a much more moist texture. Baker’s that are new to rye may mistake this for being ‘under baked’. But this is not the case, it is just the characteristic of rye, which means it remains moist and almost very slightly ‘gummy’. This will be more obvious, the more rye you have used in your bake.

Bringing the Best out of Rye in Sourdough Baking

The best way to use rye, and get the benefits of its beautiful flavor and high activity level in sourdough, is to use a portion of rye with some white wheat flour. This will give you a beautiful complex flavored sourdough with good structure and texture. Do bear in mind however, the points mentioned earlier about shaping, kneading, and moisture content of rye….the more rye there is in the dough, the more the effect will be on the overall dough structure.

Rye can come in many different varieties:

In much the same say as wheat flour, there is a varying degree of how much of the bran remains in the flour. Keeping the bran in rye has its own set of things to think about and rye can also vary in how coarsely or finely it is ground.

If you would like some more detail about which flour to choose when making sourdough bread, have a look at my article “Which Flour to use for Sourdough Bread: A complete guide”. It goes through different qualities of flour along with guides on using different flours, including what to consider when using whole wheat of varying degrees in your flour and how it can affect your bread result.

What is Pumpernickel Flour?

Pumpernickel flour is basically very coarsely ground rye, and is used to add additional texture, flavor and density to breads.

The Benefits of Keeping a Rye Sourdough Starter

As previously mentioned, rye is extremely reactive to sourdough fermentation. It ferments much faster, and brings in a wider variety of yeasts than other flours. This is why rye flour is particularly popular to use in sourdough starter. It can even be a good way to revive an inactive or ‘sleepy’ starter. It can perk up any sourdough starter’s activity, and can be used together with your ordinary bread flour to give your sourdough an awesome boost of activity, flavor and rise!

What’s more, rye sourdough starter’s can get away with very little attention because of their high activity levels. Many rye starter’s only need feedings once a week or so, and even less if it is kept refrigerated.

I personally prefer to keep a white sourdough starter, purely because white bread flour is an easier flour to get a hold of. But depending on where you live, there are some parts of the world where rye flour is just as common and widely available as white wheat flour. If that’s the case, perhaps you may consider keeping a rye sourdough starter due to it’s high activity levels and added flavor.

I like to use rye flour in my preferments, or part of my bake whenever I can, for a beautiful complex flavor and moist artisan style crumb.

Learn to get great at sourdough bread by signing up to my online course. 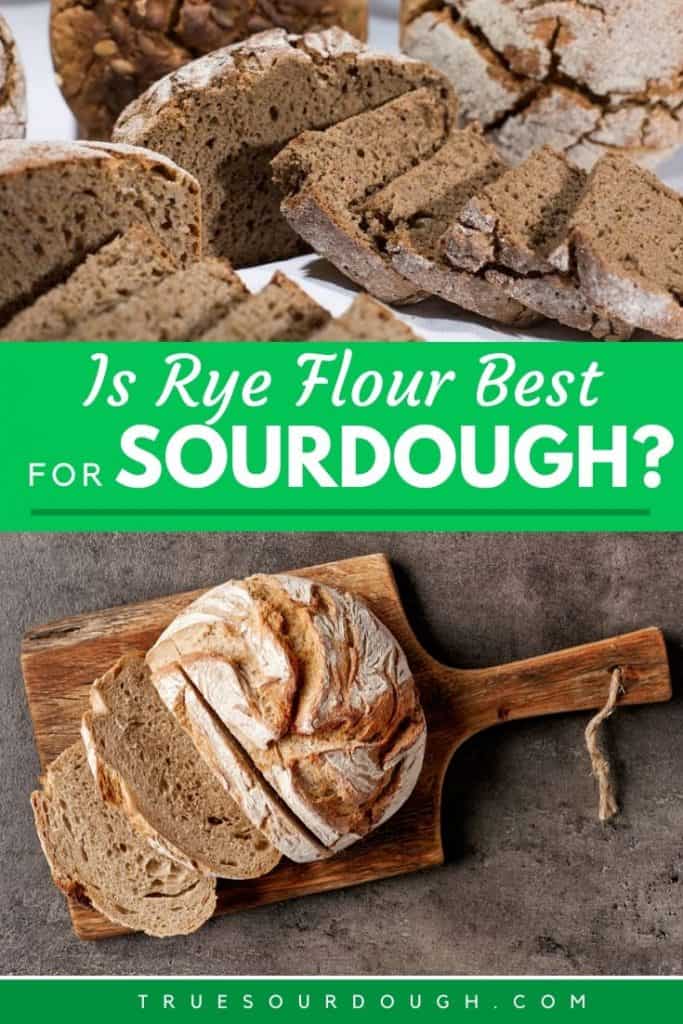 I'm glad you found it useful, thanks :-)