Sourdough Bread has a reputation for being ‘good for you’, but is this really true? I’ve been baking and eating sourdough bread for a long time now, but I originally gave it a try because of my own health issues. Along the way to becoming a healthier me, I learned a few fascinating facts about sourdough bread…

So, is sourdough bread actually good for you? Compared to other breads, sourdough breads are from among the healthiest breads that you can eat. The method of prolonged fermentation brings along with it many benefits, such as a lower Glycemic Index, lower calorie count, and increased nutritional value to name just a few.

#1: Sourdough Bread has a Lower Glycemic Index then Conventional Bread

Did you know that an average slice of whole grain sourdough bread can have a Glycemic Index of less than 49? Just to put this into perspective, anything lower than 50 is considered LOW GI, and white commercial bread has a GI of around 72 (which is considered HIGH GI).

Real sourdough bread is fermented for a very long time (anything from 6 to 48 hours!) During this time, the sugars and starches in the flour/dough break down considerably, and are consumed by the natural yeasts and bacteria found in the sourdough mixture. Because the fermentation time is so long, the sugars and starches have enough time to break down and be consumed. This is what makes it possible for sourdough bread to have a lower Glycemic Index.

Commercial bread only ferments for 1 to 2 hours and so the sugars and starches within that bread don’t have enough time to break down, which is why conventional bread has a reputation for being high on the GI scale.

If you’re concerned about keeping your sugar levels steady, sourdough bread may be an excellent alternative to conventional bread. The lower Glycemic Index means you sourdough will keep you fuller for longer, and help maintain steady blood sugar levels.

Another extraordinary reaction happens during this long fermentation time the dough has.  As the sugars and starches break down, so does another part of the wheat grain. A part called phytic acid, which is known as an ‘anti-nutrient’.

Phytic acid acts as a natural preservative for the wheat when it is still in it’s original grain form. This is one of the reasons why grains preserve so well, and are able to last for years if kept in cool dry conditions. Phytic acid protects the wheat grain from the outside elements and stops it from becoming rancid.

So, when you hear people saying “bread is not good for you because it’s just empty calories”, there is some truth to that. Although conventional bread contains nutrients in the wheat, the absorption rate of these nutrients is low. We can’t access as many of them due to the high phytic acid present in the bread.

Sourdough is different however. The long fermentation process in sourdough bread breaks down the phytic acid in the dough. In fact, if fermented for long enough, it can almost eliminate phytic acid completely, which unlocks all of those lovely nutrients and makes them available to our bodies.

Something even more fascinating is this. Not only does sourdough bread unlock the nutrition from the wheat and make it available to our bodies, but the friendly bacteria and yeasts available in sourdough actually INCREASES the nutrition in the wheat as a by product of the fermentation process! This works in a similar way to how other fermented foods such as kimchi and saurkraut develop increased nutritional value through fermentation.

How’s that for getting nutritional bang for your buck?!

#3: Sourdough Bread is Good for the Gut

Sourdough is Full of Friendly Bacteria!

Although they don’t make it through the baking process due to the high temperatures killing them off, there is some evidence that suggests that even after it is baked, this bacteria may still be beneficial for our guts.

Prebiotics in Sourdough Bread are Good for Your Gut

Another propety within sourdough bread is an indigestible fiber known as prebiotics. This is essentially a type of fiber that feeds the good bacteria in your gut. And a healthy gut usually means a healthy body. Prebiotics also make sourdough bread easier for the body to digest. Win win!

Resistant starch is a starch that isn’t completely broken down by the small intestine. Rather, it breaks down into short chain fatty acids by bacteria in our guts. Resistant starch also helps feed friendly bacteria alongside the prebiotics, but it has also recently been shown to help with many other health factors such as:

#4: Sourdough Bread is Easier to Digest

As mentioned earlier, sourdough bread uses wild bacteria and yeasts naturally found in the flour and its surrounding environment to ferment the dough. Although these friendly bacteria don’t make it through the baking process (which means we don’t actually get to eat any of it), they do offer their magic during the fermentation stage by ‘pre-digesting’ the flour.

This means that by the time the bread reaches our bodies, we have to do a lot less to break down the wheat and access the nutrients. Many people who eat sourdough bread find that it is much easier on the digestive system than other breads.

For more information about how sourdough bread affects the digestive system read “Does Sourdough Contain Probiotics and Is It Good for The Gut?”

Fun fact: Even though sourdough bread doesn’t contain any preservatives, it lasts longer than other breads due to the mold resistant properties it naturally contains!

The long fermentation process of sourdough also helps break down gluten proteins in wheat. Gluten is a difficult protein for the body to digest, and the process of sourdough fermentation uniquely helps break gluten strands into peptides and amino acids, which are alot easier for the body to digest. This makes sourdough bread an especially good option for those individuals with gluten sensitivity.

NOTE: Sourdough Bread IS NOT suitable for people who are celiac.

You’re probably wondering, “What does this fact have to do with sourdough bread being good for me?” Well, to put into perspective, commercial bread, using active bakers yeast has only been around for the past 150 years or so.

In fact when bakers yeast was first discovered, it was well known that this form of bread making decreased bread’s nutritional value, and was rejected and considered a risk to public health. But once the industrial revolution kicked in, bakers yeast came back into full flow, and sourdough bread took a back seat, being less easy to make in bulk factory style.

Sourdough bread is the oldest yeasted bread we know. Dating back to as early as ancient Egyptian times. So, the fact that we have been eating sourdough bread for thousands of years anecdotally shows that sourdough bread has stood the test of time, and was around when we didn’t suffer from all sorts of food intolerances, allergies, etc.

On the face of it, the nutritional label can be quite similar to other breads, because it has a similar ingredient list. But the difference is, other breads may contain the same nutrients, but we can’t absorb many of those nutrients. Whereas with sourdough bread, these nutrients are readily available to our bodies when we eat the bread.

Which Nutrients are Increased in Sourdough Bread?

In particular, the following nutrients are increased during the long fermentation period of sourdough: [R]

In addition to this, eating sourdough bread enhances absorption rate of the following nutrients:

And remember, sugars and starches are also found in much lower levels.

Is Sourdough Bread Actually Good for me or is it just ‘Better Than Other Breads’?

I guess this is the real question! It’s all well and good talking about how good sourdough bread is for you, but that’s when we compare it to its conventional counterpart. But in general, is it okay to be consuming sourdough bread on a regular basis without restriction?

Of course not. No food should be eaten excessively no matter how healthy it is. But switching to sourdough means you bring along with it all of the benefits mentioned above. Many people find that they feel fuller with smaller portions of sourdough bread when compared to conventional bread, and it also keeps them going for much longer.

This is advantageous for anyone looking to keep their bread cravings under control, or are trying to lose weight. The many digestive, nutritional and Insulin friendly benefits that sourdough brings with it means that sourdough bread can be enjoyed as part of a varied and balanced diet, and is a far healthier natural choice of bread than any other.

The Type of Sourdough Bread Affects its Nutrient Profile

Here’s a list of different varieties of sourdough bread that contain different nutrients.

With white sourdough bread being the most common, it’s also the least nutritious option (although still a far better option than conventional bread). Other varieties of wheat such as kamut, einkorn and spelt come under the ancient grain variety, or heirloom variety of wheat. These grains have different forms of wheat in them that make them even easier to digest due to their simpler form of gluten and low chromosome count.

Rye Sourdough is Unique in Its Characteristics

Rye sourdough bread in particular is pretty unique in its composition, and when combined with sourdough fermentation, it quickly becomes a nutritional powerhouse as far as bread goes.

In addition to the benefits of sourdough bread in general, rye contains a much lower gluten content, which makes it far easier on the digestive system, and suited to those who can’t consume too much gluten. It’s considered an anciant grain that is fiber rich, low on the Glycemic Index and is full of heart healthy nutrients.

Where can I Buy Good Quality Sourdough Bread?

If you want to get the benefits of sourdough bread, it has to be REAL sourdough bread. Unfortunately, many supermarkets sell bread that is called ‘sourdough bread’, but isn’t actually true sourdough. The nutritional and digestive benefits only come from this bread if it has been baked and processed in the traditional sourdough manner.

The best bet in finding real sourdough bread is to find a local bakery that sells it. Alternatively, learn to bake your own sourdough bread. I have created an online course that takes you from the basics of sourdough bread, to using advanced techniques and fitting sourdough baking into a busy schedule. You can check it out here.

Take a look at my Baking Tools sections to learn what equipment you need to get started with sourdough at home.

How much sourdough bread is a healthy amount to consume in a day?

It is currently recommended to consume 6 servings of grains per day. One sourdough slice of bread is equal to one serving.

Should I eat sourdough bread if I’m trying to lose weight? 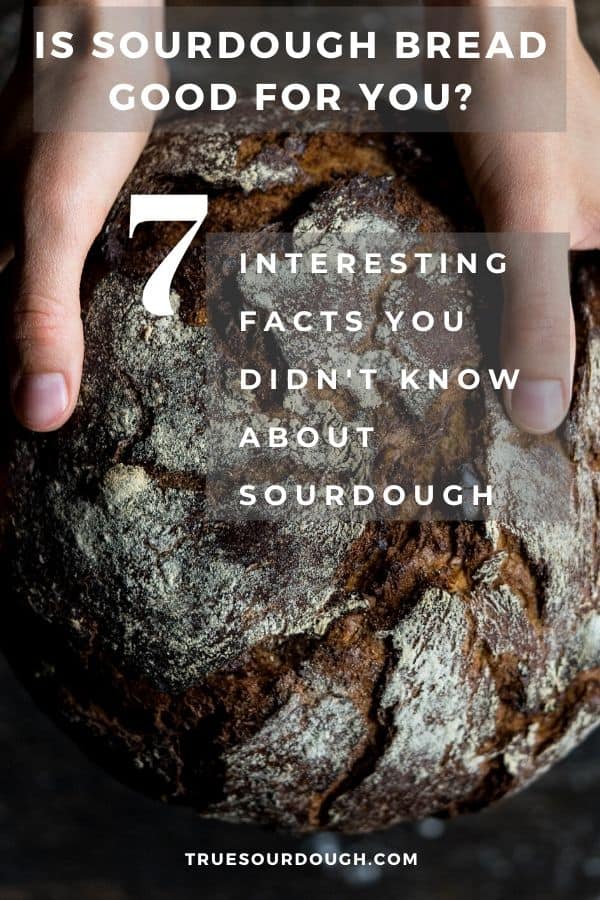