One of the reasons I started out learning to bake sourdough bread, was due to my digestive problems. I stumbled upon the naturally leavened bread when doing some research into probiotics and how they can affect your gut.

What do Probiotics Found in Sourdough do?

The probiotics found in sourdough all originate from the ‘starter‘, which is one the main ingredients in sourdough bread.

Starter, which is used as a rising agent in sourdough bread, contain a diverse range of wild bacteria and yeasts, otherwise known as ‘good’ or ‘friendly’ bacteria and yeast, that are healthy for your gut, including the well known lactobacillus strain and others.

But where do the bacteria and yeast in sourdough starter come from?

These bacteria and yeasts that are naturally found in and around the flour, feed off of sugars and starches found in the flour, and continue to grow and evolve, unlocking nutrients from the flour as it does so. (For more information about nutritional benefits of sourdough bread, read my article “Is Sourdough Bread Good for You? 7 Things you need to know”)

When a bulk amount of flour is added to your starter to make a loaf of sourdough, the bacteria have a bit of party as now they have a huge amount of food to eat!

They get to work by doing a number of things when feeding on the flour:

1. The Sourdough Bacteria and Yeast Decrease the Phytic Acid Present in the Wheat.

Phytic Acid is sometimes called an ‘anti-nutrient’. It is found in all grains, including wheat grains, and it stops the body from properly absorbing nutrients when present in large amounts.

Because the bacteria and yeasts found in sourdough reduce the phytic acid present in wheat by such a large amount, the nutrients in the bread become much better available to out bodies.

2. The Sourdough Bacteria and Yeast Pre-digest the Flour

It does sound kind of gross, but the wild bacteria and yeast ‘pre-digest’ the flour, by consuming its sugar sources. As a result, our guts are a lot happier, as some of the difficult digestive tasks have already been done by the time it reaches our digestive systems.

3. The Sourdough Bacteria and Yeast Lower the Glycemic Index of the Bread

Because the bacteria and yeasts consume the sugars, sourdough bread has a much lower glycemic index than other commercially yeasted breads, and so our sugar levels remain much more steady after consuming it. (You might like my article “Is Sourdough Bread Low Carb? Calories, Carbs, Fats and More”

One of the by-products of the bacteria and yeast feeding, is a production of lactic acid.

Lactic acid is what gives sourdough bread its wonderful sour flavor, but it is also the substance that protects the bread from developing mold and other bad bacteria from getting into the bread.

This is one of the reasons why homemade sourdough breads will last that little bit longer than other homemade breads, as it naturally has mold resistant properties in it.

Although all these gut friendly benefits come from eating sourdough bread, it’s important to note, that probiotics don’t actually survive the high heat in the baking process of the bread.

What About Prebiotics in Sourdough Bread?

Sourdough bread may not contain probiotics by the time you eat it, but it definitely contains prebiotics.

Prebiotics are the other half to good gut health and sourdough bread has plenty of it.

Prebiotics are able to survive the baking process, as they are not affected by high heat. They are a type of fiber which our gut bacteria uses as a food source.

Sourdough bread in general is far better for your digestion when compared to other breads that have been fermented with commercial yeast. But if you want to narrow it down even further, some varieties of sourdough bread will be even easier to digest due to their grain structure.

Ancient grains are far easier to digest than modern wheat varieties and it is worth giving these breads a try if you are suffering from any digestion issues from other breads.

Here’s a list of some ancient grain varieties to try…

They have a different structure in their grain and tend to be simpler for the body to break down.

Different grains will contain different types of prebiotic fiber in them. This means that they feed different species of bacteria in our guts. This in turn releases a different variety of nutients for our bodies.

So the best scenario from a diversity perspective, would be to eat a range of sourdough breads that have been made from a variety of grains, hence releasing a variety of nutrients into your body.

What About Fiber in Sourdough Bread?

Prebiotic is a form of soluble fiber, but sourdough bread also contains other types of fiber. Namely:

This is the ‘roughage’ that is found mainly in the bran of wheat. It is not absorbed or fermented by the gut. Rather it acts as a bulking agent to help pass out all the waste. Consuming wholemeal varieties will give you a larger amount of insoluble fiber.

Resistant Starch is a type of fiber that has recently been discovered to have a whole host of benefits for the body, including:

If you are looking to increase your resistant starch and fiber intake, the wholemeal varieties of sourdough bread offer a greater amount than the white counterpart.

Fiber in general, insoluble or soluble, is something that modern western diets tend not to get enough of.

And sourdough bread is a good way to get both types of fiber, with the added benefit of it it being more nutritious for body, thanks to all the friendly bacteria and yeasts found in the starter of sourdough bread.

There is far more fiber in the wholemeal varieties of sourdough bread, as most of the insoluble fiber is contained in the bran, which is missing in white sourdough. Between about 11% and 13% of fully wholemeal sourdough bread is made up of fiber.

As I mentioned earlier, when sourdough bread is fermened, the wild yeasts and bacteria feed off of sugars in the wheat. This means that there is less sugar in the bread as a result than in commercially yeasted breads.

Here’s a break down of the Glycemic Index of sourdough bread, when compared to bread made with commercial yeast:

As you can see from the table above, A 100% white sourdough bread is considered to have a GI of around 50, which is medium GI.

And a 100% wholemeal sourdough loaf will have a glycemic index of less than 40, which is considered a low GI food.

When you compare this to the much higher GI of commercially yeasted bread, you can see that sourdough bread is far better for your blood sugar levels. Any food with a glycemic index of 70 and above is considered high a GI food.

If you’re ready to learn how to bake sourdough bread in a step by step format, check out my online course here.

Is Sourdough Bread Good for IBS?

I suffer from IBS along with other digestive issues, and find that sourdough bread is tolerated well if it has been fermented for long enough.

It is far easier to digest than other breads, and if insoluble fiber is a trigger for you, then white sourdough breads will be easier for your digestion, as these types of sourdough are also considered a low FODMAP food.

It is important to note that individuals will react to foods in a unique way, so suitability will vary. 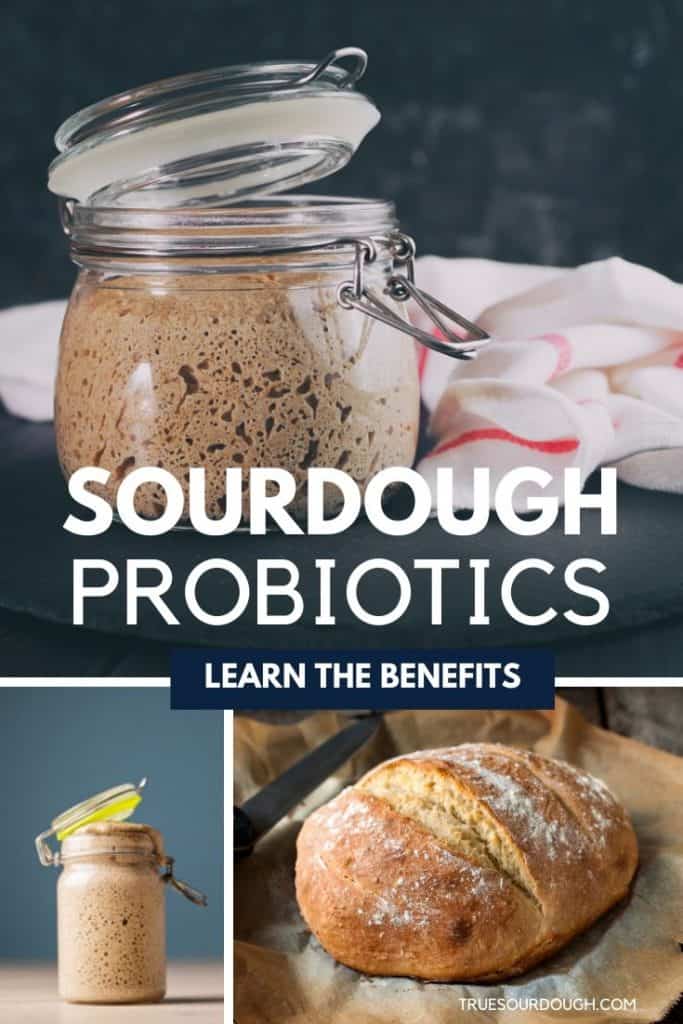