Sourdough bread is known for being one the healthiest types of bread you can eat, but if you’re on a low carb diet, there are certain ‘healthy’ foods that are on the forbidden list. I have a few friends who are on the ketogenic diet, who wanted to know if they could enjoy my homemade sourdough bread, so I did a little digging to find out.

Is sourdough bread considered a low carb food? Sourdough bread contains less calories and carbohydrates than other breads like for like, because some of the starches and sugars are consumed during the fermentation period. However, for anyone trying to restrict their carbohydrate intake, it is still high in carbohydrates when compared to other foods such as vegetables.

It really depends on which type of sourdough bread is consumed, some small slices contain as little as 10g of carbohydrates per slice, which is about the same amount as ‘low carb’ breads on the market.

How Many Carbohydrates Does Sourdough Bread Contain?

As mentioned earlier, sourdough bread will have less calories and carbohydrates than their conventional bread counterparts due to the consumption of starches and sugars at the fermentation stage of making sourdough bread. But some sourdough breads will still be considered too high carb for someone restricting their carbohyrate intake to ketogenic levels.

Here’s a comparison table of the total number of carbohydrates found in conventional breads compared to the sourdough version of the same bread. (values based on a large 36g slice)

These are numbers for total carbohydrates, but this is not the only count you need to look at.

How to Calculate Net Carbohydrate Intake

For example if a nutritional label says:

So this means, the more fiber there is in the food, the less net carbohydrates your body is taking in. This is important when looking at sourdough bread, because some sourdoughs have a significant amount of fiber in them, which is a good way of allowing sourdough bread into your diet while still remaining low carb.

Here’s a table with the NET CARBOHYDRATE INTAKE of each sourdough bread type:

These numbers are for one large slice of bread. You could opt for a smaller whole wheat slice of sourdough bread and the net carb intake would only be about 10 grams, which is about the same amount as ‘low carb breads’ that you can buy!

QUICK TIP: If you were to make the sourdough bread at home, you have the control to be able to ferment it for an extra period of time. This will give the dough a chance to consume even more of the sugars and starches in the flour, make it even lower in carbohydrates!

How Many Carbohydrates can you have when on a Ketogenic Diet?

If you’re new to a low carb diet and are trying to get into ‘ketosis’ (this is when your body uses its fat stores as a source of energy rather than glycogen), then it’s recommended that you stay under 50g of carbohydrates a day.

But once your body is well into ketosis, most people are able to eat up to 100 grams of carbohydrates a day and still stay in ketosis. This means sourdough bread can be eaten on a low carb diet with careful planning.

Calories and Fats in Sourdough Bread

Fats are naturally low in sourdough bread and will be pretty much the same as other breads. If you do want to increase your fat intake, have the bread with lashings of butter. Yum!

Here is a table of fats and calories for different types of sourdough breads. (Based on a large 36g slice of bread)

Other Nutritional Benefits of Sourdough Bread

As you can see from the table above, whole wheat sourdough bread has a low Glycemic Index. You will certainly find that when you eat properly fermented sourdough bread, that it will fill you up very quickly, and keep you full for a long time. This is advantageous for anyone trying to lose weight or stay on a steady blood sugar level.

You may like to read my article “Is Sourdough Bread Good for you? 7 Things you need to Know”

Alternatives to Sourdough Bread on a Low Carb Diet

You may decide that bread is just too complicated as part of a low carb diet. At the end of the day, it can be enjoyed, but only with careful planning.

If this isn’t for you and you’re looking for an alternative, here is a list of other foods that can help fill the bread gap in your diet:

There are low carb ‘bread’ recipes available online that are made with ingredients such almond flour instead of wheat like this one.They will be far lower in carbs than any other breads, including sourdough breads.

I know it sounds harsh, but sometimes it’s just a matter of getting used to eating in a different way. We see bread as a crucial part of our diets, but there are many other ways to enjoy food that doesn’t involve bread.

Other alternatives that can be used instead of breads in your meal are:

Many people on a low carb diet assume that bread is completely out of the question, but they forget that you are indeed allowed up to 100 grams of carbohydrates a day. So if you really need that bit of bread to make your day better, then plan to have a small enough portion of it so that it stays within your limit of carbs per day.

QUICK TIP: If bread seems to be a trigger for you, it may be better just to keep completely away from any form of it, including the low carb alternatives. This way you give your body a chance to learn to enjoy food without the use of breads at all.

If you’re looking for low carb bread brands to try out, here is a list of a few popular ones:

QUICK TIP: One of the best ways to control the health and GI of your sourdough bread is to learn to make it yourself! Check out my online course, where you can also learn how to make sourdough bread using lower GI flours like whole wheat.

How many slices of sourdough bread can you eat on a ketogenic diet?

This depends on how many carbs you have eaten during the rest of the day. But on average, one small slice of whole wheat sourdough bread can be enjoyed as part of a low carbohydrate diet.

Is sourdough bread better for you than other breads?

Yes, sourdough bread contains many additional health and nutritional benefits than other breads. For more information read my article “Is Sourdough Bread Good for you? 7 Things you Need to Know”

Is sourdough bread a simple carbohydrate? 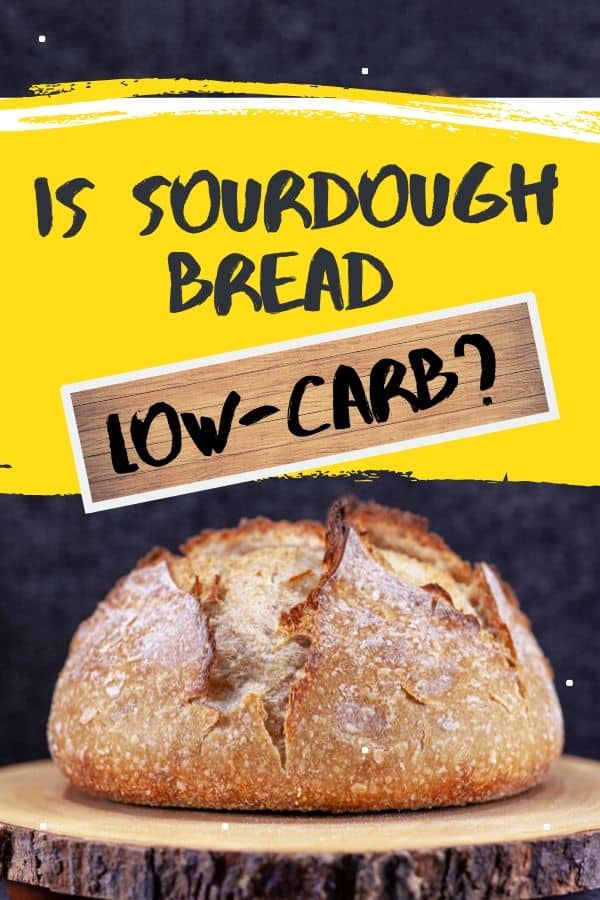