As the vegan trend continues to grow, many of us find ourselves on a huge learning curve, trying to understand what is and isn’t on the table when it comes to vegan friendly foods. Sourdough bread often comes up on the list of “is it or isn’t it?”.

Wether you’re providing for a vegan loved one, or still trying to figure things out on your own vegan journey, here we have some details on what to check for when looking into sourdough bread.

But not all sourdough breads are made the same, and many have ingredients in addition to the original. Here, we go through 4 things to look out for before purchasing sourdough bread, to make sure that you don’t mistakenly include non vegan bread into you, or your loved ones diet.

An enriched sourdough bread, is one that has been ‘enriched’ with other ingredients in order to change the flavor and/or texture of the bread. Many enriched sourdough loaves will contain added ingredients such as milk, eggs and butter. Particularly if it is a ‘sandwich bread‘. All of which are not suitable for vegans.

Checking through the ingredients list will give you an immediete indication of if the bread is traditional sourdough or not. The list should have only 3 or 4 ingredients:

2. Bread Tins may have been Greased with Non Vegan Ingredients

Sometimes, even though the bread doesn’t contain any added ingredients, if it has been baked in a loaf tin, you should check what the loaf tin has been greased with. Vegetable oils and such are fine, but often it may have been greased with butter or margerine. This is a good question to ask if you are buying from your local bakery.

NOTE: Sometimes bakeries also butter the loaves after coming out of the oven to soften the crust a little. This is another question you may want to ask the baker.

3. Some Sourdough Breads are Sweetened with Non-Vegan Ingredients

Sweeteners are sometimes added to sourdough breads for 2 reasons.

Different sweeteners can be used, but the most common non vegan one to look out for is honey.

4. Some Sourdough Starters are Given Non-Vegan Foods to Boost Their Activity

Going through the ingredients list is the best approach when buying shop bought sourdough bread. Here are some common ingredients to look out for that are NOT VEGAN:

The following ingredients can be plant derived OR animal derived:

Quick Tip: As a quick check, look through the allergy information to easily see if it contains dairy, milk or eggs. These are the most common of all the non vegan ingredients added to breads, so it’s a quick way of identifying which breads are worth looking into a bit more.

When buying from a bakery there is the added advantage of being able to speak to the staff to find out exactly how your bread was made.

Good questions to ask your local bakery are:

These questions will give you a good indication about how suitable the bread really is for vegans.

Here is a reference table to give you an indication of which breads may suitable for vegans or not. I say just an indication because individual breads may vary. This a list of breads that traditionally would or wouldn’t have vegan based ingredients in them:

Is Sourdough Bread Considered Plant Based?

If your vegan diet consists of whole plant based foods only, there are some additional factors to take into considration. White sourdough bread is NOT considered a whole food, so the traditional sourdough loaf would not be suitable for a whole foods plant based diet.

One way to be super sure that your sourdough bread is 100% vegan and/or plant based, is to make it yourself at home. It’s really not that hard to get started. Sourdough bread takes time to develop flavor, but most of the effort is all done by the bread itself, not you!

If you have a sourdough starter available to you, it’s simply a matter of mixing the ingredients together, leaving to ferment, shaping and baking! To learn how to bake sourdough bread, try my online course.

The advantage of making your bread at home means you can even enjoy enriched loaves like brioche or sandwich bread by using alternatives to dairy based ingredients.

How to Adjust Sourdough Recipes to Make them Vegan Friendly

If your recipe requires eggs, this is a vegan alternative that you can use. One batch is equivalant to one egg in a recipe.

Dairy milk can easily be replaced with alternatives such as coconut milk, almond milk, rice milk etc. The only thing to bear in mind is the thickness of the milk. If using something like almond milk, which tends to be quite runny, it may be worth adding a little oil into your recipe in addition to the milk, especially if the recipe insists on full fat milk.

Any vegetable based oils can be used instead of butter or margerine. The oil can be replaced weight for weight, and may actually help your bread to last a little longer! Some examples of alternatives are:

Honey is often used in sourdough recipes to help boost the leavening power of the bread, but other sweeteners can be just as effective. They have to be sweeteners that contain sugars which can be consumed during the fermentation stage of the bread (so something like xylitol wouldn’t work, as it can’t be consumed as a sugar by the femrentation process). Some vegan friendly alternatives to honey that can be added to bread recipes are:

Is sourdough bread good for you?

Traditional sourdough bread is fermented, which makes the wheat in the bread more nutritious and easier for the body to digest. It is considered one of the healthier breads also due to its lower glycemic index. For more information about the health benefits, read my article “Is Sourdough Bread Good for you? 7 Things you need to Know”

Is the yeast in sourdough bread vegan?

Sourdough bread contains a diverse range of naturally occuring forms of yeast. All forms of yeast are a type of fungi, and are considered plant based and vegan. 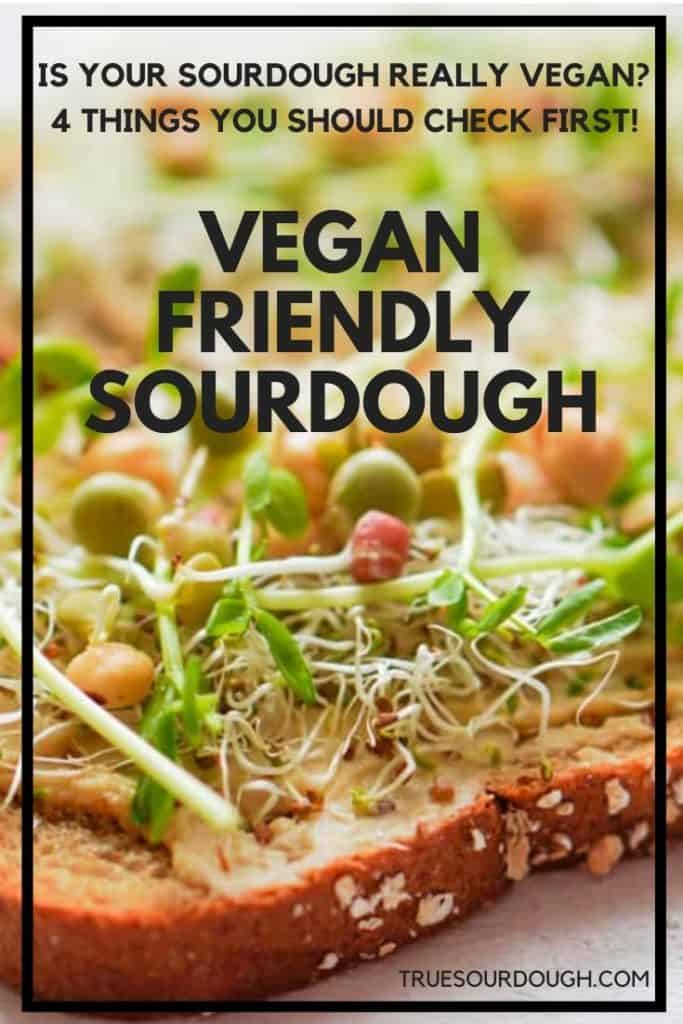